How do we promote our site?

Looks like we need to ask the questions and help work out how to run this site. Given that, and given this questions current absence from this site, despite being featured here: http://blog.stackoverflow.com/2010/07/the-7-essential-meta-questions-of-every-beta/, I think we need some suggestions of how to get this site promoted!

This is rapidly becoming a hot issue across the entire network: how to promote your site and how to reach out to the experts and pundits in your industry. We can come up with budgets and promotions but — more than any other issue raised here — the means and ideas about how to reach your target audience HAS TO come from you and your community. Has to. Has to, has to, has to! We simply are not experts in your field. We don’t have the the connections nor the experience you bring to the table. You are both our evangelist and our ambassador.

Vote on other site attributes

In addition to getting the url to the site out there, I think giving specific examples of questions that have been answered could be valuable. Similar to the ads shown on SO: 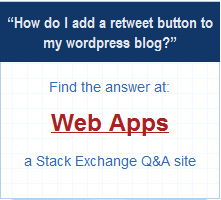 If you've had a question answered here, let people know where you got the answer. This applies to Twitter, Blogs, Facebook, etc. Rather than giving someone a url which they may just think "oh, I'll look at that later" and then forget, this gives them a specific example as to the value of the site.

If you subscribe to aardvark, if you get any questions on webapps, just point them to here.

I have created a twitter account, Nothing2Install (darn the character limit!) to try and draw in more users. I have been doing searches to find things like how do I for facebook, google, gmail, and twitter. I think the best situation is when I can link someone directly to an answer to their question. I will still link someone to the site itself though. I know this won't help a ton, but maybe a little?

Not sure about this one, but:

Asking common questions that you already know the answer to?

It seems like quite a few of the questions on here fit under this description - especially given the current early-adopter and tech weighted audience of this site.

Slightly controversial, but trawling StackOverflow and SuperUser for questions that could/should be here and, er, voting to close, or commenting on sending them here?

The best way I can think of is to put a copy of StackImage Flair on your blog or in your signatures on forums.

It's a small image that stays up to date with your current reputation on this site:

Where can I get it?

How does it work?

StackImage fetches your current reputation using the API and creates an image based on the parameters supplied in the URL as follows:

Not the answer you're looking for? Browse other questions tagged discussion promotion .

26
Webapps.stackexchange.com versus Nothingtoinstall.com
6
Site Attributes
6
What experts/evangelists are there in the Web Applications area that we can reach out to for promotion?
4
What conferences and events could WebApps.SE have a presence at?

5
What should our FAQ contain?
6
What experts/evangelists are there in the Web Applications area that we can reach out to for promotion?
4
How are the new rep benchmarks working?
9
How to deal with "How do I do <X action> in <Y webapp>, where there is no way to perform X?
4
What happened to our blog?
11
2013 Moderator Election Results
8
Can't make the [connections]