Do we need a close reason for questions asking about proprietary/non-public information or policies?

We get a fair number of questions that are similar to Email Taken and also not found on Instagram (not picking on any one user in particular, the question just happened to be at my fingertips).

I'm of the opinion that the vast majority of these questions are only answerable by the developers/stakeholders of the particular web application.

In this particular case, it would seem to be "obvious" that Instagram doesn't recycle email addresses, but really the situation could have arisen from some internal policy of data normalization or something as random as a particular IP address trying to log in (not really putting the question up for debate, just to say that it's largely unanswerable).

As such, I propose we retire:

Questions on applications or application features that are no longer available are off-topic for Web Applications as no one will ever be able to make use of the answers again.

which only gets occasional use, in favor of something like

Questions that ask about the internal policies, technologies, and algorithms of web application companies are off-topic because only the company or its developers truly know the answer.

I know that we've used "Primarily Opinion-Based" as the reason for closing these questions, because any answers are essentially guesses, but I think it would be nice to have a concrete close reason for these that we can show to users. To those new to Stack Exchange, saying that a piece of sought-after factual information is a matter of opinion is probably misleading, since it is likely known to a chosen few.

Many of these questions could be marked as "Too Broad" as well, but certainly asking something about data backup policies at Facebook could be answerable in a succinct way if you asked a very small audience of people making decisions at Facebook.

Any thoughts on this? Is the existing close reason valuable enough to keep it for statistical purposes, etc.?

The proposed reason sounds good. But we should not need to retire the "no longer available" close reason, the usage of which is uneven in time (consider the upcoming Google+ retirement).

A site can have 4 off-topic reasons, for example Software Engineering does: 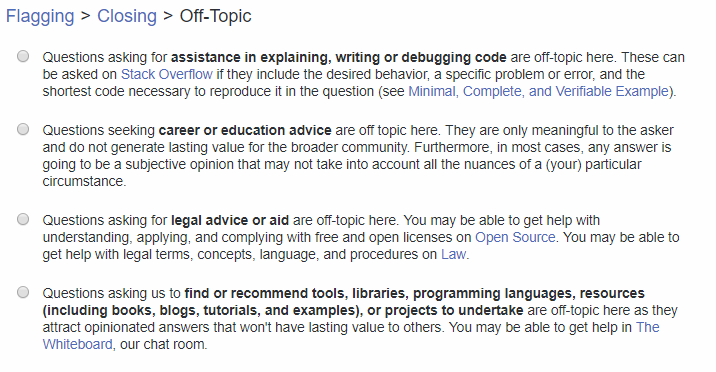 It turns out that there are, in fact, only 3 custom close reasons available. I'm going to propose this as a change. I will certainly entertain opposing viewpoints if it becomes problematic.

Welcome!
This site is for discussion about Web Applications Stack Exchange. You must have an account there to participate.
Help
Visit chat

7
Why we're not customer support for [your favorite company]
2
Can something like "Why does LINE demand to verify a cellphone number when I start the application on my laptop?" be on-topic?
0
Webmail apps not considered web applications
-2
Why questions about archive.is are offtopic, when archive.org, Gmail, YouTube, Google Search are all fine?

20
My {insert email web app here} account has been hacked!!!1!1!!1 Halp!!!11!1!one!
7
New close reasons: unclear, too broad, opinion-based, and custom sub-reasons off-topic
9
Re-phrase "web development" close reason
10
Make all recommendation questions out of scope and off topic, regardless of research
7
Please update the "recommendation" custom off-topic reason to include guidance to Software Recs
8
We must [unsubscribe] from the [subscription]
6
Is Web Applications still the best stop for bookmarklets?
2
Is my question off-topic?
1
Web Applications isn't for bad questions about app development and Super User either
4
What question should be used (or set) as the canonical question for questions about split/transpose column values?