Is the Review notification (a white number on a brown background) working “the right way around”?

I only ever seem to see that number when items of mine are in the queues (of which I do not need notification) whereas I thought the intention was to encourage users to perform review tasks by indicating the extent of the backlog (and I can't review my own suggestions).

After a day or two of no notification (for me) on main, when I stayed away from reviews, the number has come back for me. (During my time away there were up to 19 items shown as needing review and a dozen or more for hours at a time.) Strangely I now also notice (just!) a small brown dot I have never previously noticed:

and another on meta (not in exactly the same 'spot'):

Neither show up in a snip, so I have added red dots to show where.

Hovering over the 1, or perhaps the dot next to it, shows:

when the queues show: 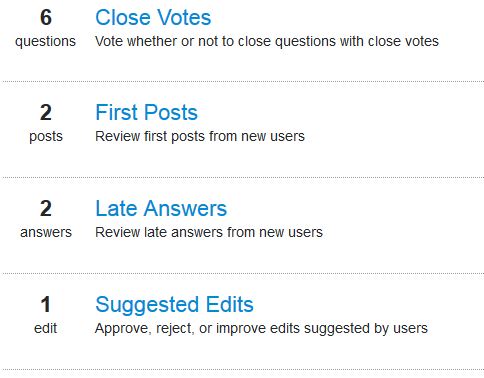 Hovering over the brown dot on meta does not show anything, but then I suspect all six items there are mine.

I wonder whether A/B testing and I'm in a different group to others.

No 'measles' today - but a very, very feint trace there used to be a dot (on meta). 1 showing on main and indeed 1 in the review queue for Suggested Edits.

The dots are back. Perhaps the one on meta is indication that there is a dot on main.

Yes, it's working correctly. Or, at least, as designed.

I'd need to go dig it up, but there have been many questions about the review count notification and people clicking it and not finding anything to review. (Check on Meta Stack Exchange.) From what I recall, SE simply wants the people who have access to know there are things there that need to be addressed.

It's annoying sometimes, but that's the way they've designed it.

Not the answer you're looking for? Browse other questions tagged support review .

10
Tag Excerpt (guidance) improvement project
4
How long are our edit suggestions valid for?
0
Has the system lost its marbles?