Has the system lost its marbles?

TL;DR This is not about badges or rep, it is about the system.

Checking to see whether a Comment I had made was correct I went to my Activity page, and was greeted with:

Oh! I thought, and clicked Let us pickto get rid of the announcement, whereupon I saw:

According to Badges the two are distinct (and I don't have Civic Duty).

Poking around a bit further I then came across this:

so looked at the Profile for that user: 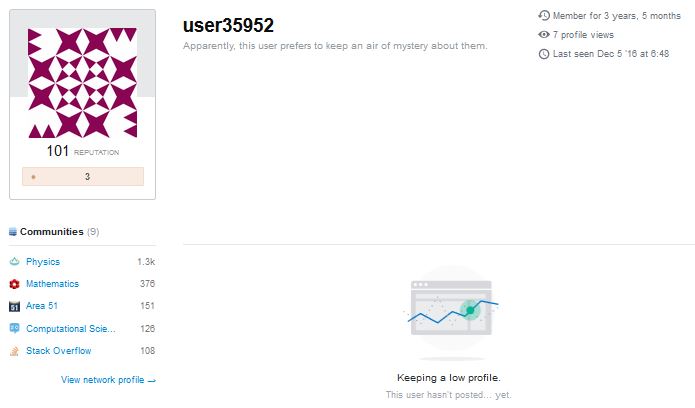 Apart from the association bonus (Feb 27 '14) it shows no reputation changes at all, up or down.

It seems to me odd behaviour.

What do the above mean (and preferably, 'why' too, if applicable)?

Immediately after posting this I noticed the 'announcements' icon was green. I do now have the Civic Duty badge and may has earned that and Cleanup at the same visit. So perhaps just a time lag. However rep for user35952 has not (yet) changed.

To attempt to clarify:

Why has the system granted a user 45 rep in the current week when (i) that user is shown as never having posted either a Q or an A here, (ii) ever having edited anything, (iii) it is not the association bonus (100 - shown as earned earned by that user more than three years ago), (iv) the user's Activity shows no change for the week, (v) and there is no indication the user is under a ban. What's more (vi) the "last seen" date is last year and, IMO, unlikely that user kept a session open for very nearly nine months.

Perhaps I should have written that user is shown to me (and most users) as never .... But even after an A below I'm still do not fully understand. To get the bounty back (something the Help Centre says is impossible: the reputation is non-refundable under any circumstances) presumably that OP awarded it and the Q was asked at least eight months ago. I’m guessing it is the same Q that was upvoted (+5 rep, with the bounty having been 50 rep) but the age issue would be the same regardless if a different Q. I thought that deletions happening six months or more after an associated rep gain or loss did not trigger a +/- rep adjustment?

(Maybe depends upon which SE site?)

Somewhat adds to my confusion that Civic Duty can be earned of both main and meta but for meta my Cleanup was awarded Aug 21:

I'm guessing that notification may not have been immediate. Possibly not even the same day. However looking back now over Achievements, Last 7 days I see Civic Duty (and too much else to show here) but no Cleanup.

Considering the response from Sathya (for which, thanks):

Your initial premise is wrong …

What I wrote and what Sathya appears to be replying to with the text referred above is (a) correct and (b) not a premise.

The roomba explanation is however constructive – it explains what happened (though not why).

That is with the context of bounty once started.

I think we agree a bounty was started? So the relevant context is as in Reputation & Moderation that includes:

The emboldening is as on the linked page (not added by me). Nowhere on that page do I see anything about “refundable” (as opposed to “non-refundable”) though I know, for example, mods are able to refund bounties (even if ‘awarded’ by themselves). As an aside, IMO the ability for mods to refund is appropriate, but there should be specific mention that that is the case (even if included as a brief and possibly small-print footnote).

Throughout that page the only mention of refunds is with regard to their being non-refundable (stated unconditionally, stated three times and twice even emboldened).

The conditions for ‘adjusting’ reputation when a Q or A is deleted are complex and, IMO, not stated here in a crystal clear way (excellent effort though). So skipping over that and instead considering what is the purpose/effect of a bounty. According to Reputation & Moderation:

So OP presumably got what the bounty “paid for” – ie an attempt at more attention than otherwise. That a year or more later the post was deleted did not rewrite history – deleting the Q did not then retrospectively redirect elsewhere the attention given when the bounty was placed.

I've found another reference in the Help Center, Privileges > Set Bounties, where irreversibly deducted from your reputation is mentioned (though not in bold) and some details of what a bounty "buys":

It seems stupid that a Q that has (presumably) been deemed off topic (ie is no longer with us) getting the same special attention at the same 'cost' (bounty) as a Q we value (is still Open) gets its 'advertising fee' back and the one we value does not.

Seem to invite off topic Qs - protected from Closure by a bounty - that will take priority over on topic Qs, all at no cost to the abuser.

Seems the above bounty refund is not the only example. So post an off topic question and apply a bounty to it and you'll not only get more attention than others posting on topic questions (at their 'expense') but be patient and your bounty will be refunded, provided your Q is bad enough to be deleted.

You initial premise is wrong because the person had one question on which a bounty was issued and because of lack of activity, it was Roomba'd and subsequently the bounty rep, the rep from question upvote was returned and that's why you see the rep change

(something the Help Centre says is impossible: the reputation is non-refundable under any circumstances)

Only if they meet the score threshold

Reputation changes from bounties, votes (both up and down), and acceptances on deleted posts (including answers to a deleted question) are nullified. (Exception: Reputation earned for posts with a score of three or higher, and where the post has been visible on the site for at least 60 days, is retained).

Not the answer you're looking for? Browse other questions tagged support notifications .

2
Rep hit for downvotes on meta.webapps
5
When should "not an answer" be used here on Web Apps?
4
Last user's name/answer on question
2
How do I change the details of a flag I submitted?
10
Tag cleanup for July 2013
1
Why no bounty for a +2 accepted answer?
0
Why did I lose reputation points? 460 became 450
3
Can one reject suggested (by others) edits to one's own post?
3
Make [windows-live-mail] a synonym of [outlook.com]
3
Question should be closed as unclear