Towards the end of 2016 the rate at which new users were joining shot up: 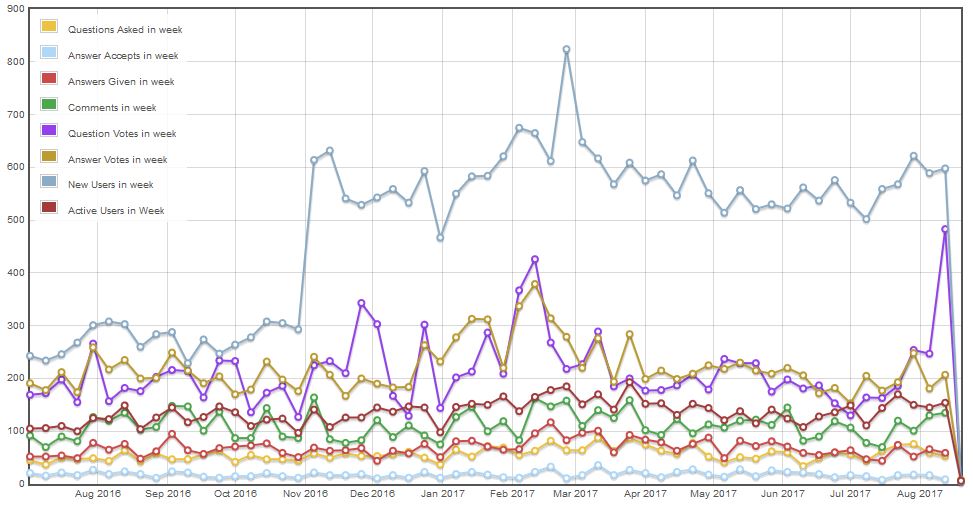 I can speculate (eg a major tidy of tags and Titles perhaps?) why but do not have a plausible theory that might explain both the jump and persistence at the higher level. ‘Hats’ may have drawn interest from other SE sites but this might only explain the increase, not that the higher level has been sustained.

Changes in Google’s algorithm have been known to make a significant difference to traffic, but I thought for SE that was generally felt as reductions (ref), and anyway was earlier in time, from what I recall (WA did experience a dip in the middle of 2014).

Google refines its algorithm very regularly, and I see nothing very exceptional at the beginning of November last year. Yes, there were “major updates” at around the right time but with 500-600 search algorithm changes every year there can be several “major” ones in a single month. Anyway, some industry speculation was that the change around November 10 was largely reversed about a week later. (Also: it takes a fair bit for Google visitors to ramp up, if SU, SF, and SO are any indication. – Jeff Atwood♦ Jul 29 '10 at 3:46.)

Better understanding may help with providing a better service, in particular to our main audience, the viewers who have no say here.

Is there an explanation - those with access to site analytics may have a better understanding? (Even a plausible hypothesis would be of interest.) Users who joined at the start of November 2016 might have some insight.

It's not that more users are created, it's that fewer are deleted. The majority of new users never do anything after creation (not even visit the site again), they are some kind of background Internet noise. And for years, Stack Exchange deleted such users after 6 months.

On May 3 of 2017, the user-deletion process was stopped. Counting 6 months back, we get to November 2016. So, the users created in November 2016 or later are no longer subject to inactivity culling after 6 months.

Looking at only the numbers of 'New Users in week' after the change they seem much more variable than SO but average out to be slightly declining, with a slight recent upward trend:

Welcome!
This site is for discussion about Web Applications Stack Exchange. You must have an account there to participate.
Help
Visit chat

16
Why aren't people voting? How can we get people to get more engaged?
9
What happened in May, 2014?
0
Is the number of Web Applications SE visitors saturated?

12
Celebrating our Birthday
16
Why aren't people voting? How can we get people to get more engaged?
10
Revisiting the decision on Google Analytics
5
Was a question migrated to Web Applications by mistake?
4
Do we want questions about what software runs a web site?
2
Community Promotions Ads - 2016
4
What makes a post a duplicate of another, their content, their context or both?