Can one reject suggested (by others) edits to one's own post?

I recently edited this question: Improve auto-generated subtitles/CC for Youtube videos that are not mine

I later found out it was rejected, although I thought it was a solid edit (similar to numerous others on the site). Curious to learn why so as to correct my mistakes I looked for the reasoning behind the rejection:

What first caught my eye was the fact that in spite of the fact that only one user had reviewed the edit, the rejection was validated.
Puzzled as I was, I found out that the one and only person rejecting the edit was the writer of the question as well.
To wrap the whole thing up, when one takes a closer look, one can notice that the user is so far awarded on this site with a reputation of 181. 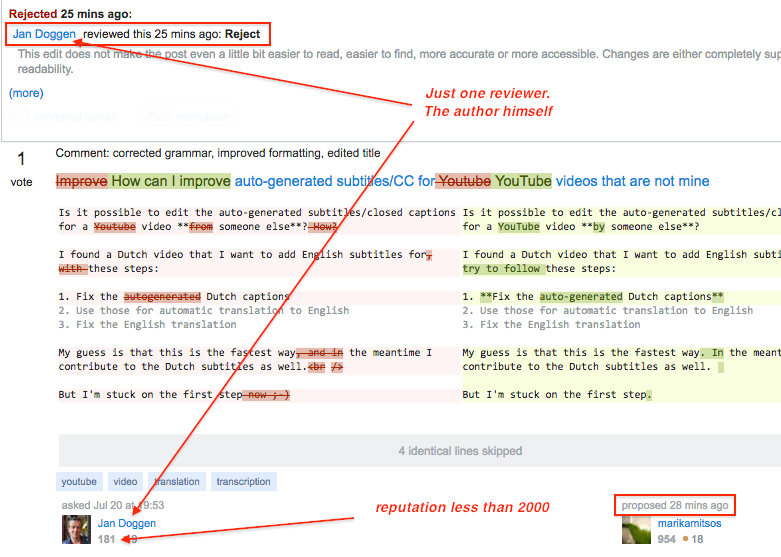 As per site rules:

What is edit questions and answers?

We believe in the power of community editing. That means once you've generated enough reputation, we trust you to edit anything in the system without it going through peer review. Not just your posts- anyone's posts!
......

In addition, users with this privilege level can also begin reviewing suggested edits (which previously you would have had to suggest). These edits remain in a pending state until they get enough votes to either approve them and make the edits take effect or reject them and discard the edit. Two votes in either direction will finalize the action, except on Stack Overflow where three votes are required.

So, regardless of whether "my edit" should be rejected or not:

Can someone reject suggested (by others) edits to his/her own post without even having the necessary reputation points and without the given assent of a second user (peer)?

If so, what is the point of the following message:

The author is also allowed to review suggested edits to their post, and their vote is binding, either for or against.

That's not to say that someone else couldn't come along and edit the post later (especially if they have full edit privileges). But the thinking is that the original author knows more than most whether a suggested edit is a good one or not.

7
Is it possible to get the 100-reputation bonus for having a linked account with 200 rep after I've already signed up?
4
Notifications for rejected suggested edits
4
Edit suggestion rejected and approved at the same time
5
What reputation is deducted on answer migration?
4
How long are our edit suggestions valid for?
4
Should we delete spam links as well as flagging the post?
3
What kind of spammer/scammer operates by removing a tag from a question?
0
Is the Review notification (a white number on a brown background) working "the right way around"?
3
Improve questions that are off-topic?
9
Please help reviewing suggested edits!