Why are more general tags getting removed from questions?

Take a look at this revision for an example: https://webapps.stackexchange.com/posts/50481/revisions

I don't see a reason to remove the more general tags. They make it much easier to find an answer and provide better visibility. Personally I do not follow as specific tags for everything, so I miss some Google related questions that I may be able to answer simply because their less specific tags are being removed.

Superuser Meta had a similar question and it would appear that less specific tags shouldn't be removed.

Take a look at the tags I have favourited. I would miss a question like mine above asking a Google Presentation question, however I would most likely be able to answer it. 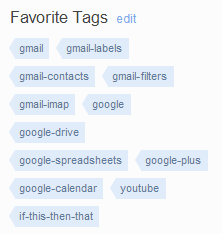 This also depends on if the general version of the tag relates to the company or to a product.

For example, on a Trello question about using the cards, you would have trello and maybe trello-cards.

Here, Trello might seem general, but it's specifically about the product. Hence, in that situation, you wouldn't remove trello and leave the question with just trello-cards.

On Google product questions, this is trickier, because now you're dealing with the company, and not the product. For a question on Gmail, the gmail tag suffices because that's the product. Tagging on google is unnecessary because that's a company-wide or multiple-product tag.

Logging into a site with Google credentials? Yes, that would fit the use of the google tag.

Another example. Say the question was about configuring Flickr sets. flickr is the product, and a general tag that you would have at the least. You wouldn't remove that in favour of flickr-sets because now the "general" product tag is gone when it was perfectly fine being there.

But, it's owned by Yahoo!, though you wouldn't add the yahoo tag as that relates to the company, not the product.

I haven't reached a conclusion on what the right course of action is here, though my feeling is that we should keep the more general tags, but in the meantime if you specify your tags with a wildcards:

you should get all tags that start with "google*:

(which I've had to manually include as the auto tag conversion doesn't work with wildcards.)

Though it's only a partial workaround, because in this case it doesn't include the google-presentations tag as that would take it over the 260ish character limit for URLs

I've been reviewing the google tag lately. When I'm done, then most probably the google-spreadsheets tag will hit third place of most popular tags.

I would've made the same alterations, Al made.

Not the answer you're looking for? Browse other questions tagged discussion tags .